215 goals is the Chilean Primera Division record Francisco Valdes has held since the early 1980s. Pedro Gonzalez (213) fell just short of eclipsing it before his 2006 retirement, but now 38-year-old Colo-Colo striker Esteban Paredes (210) is on its brink.

184 goals is the international football record, belonging to former USA striker Abby Wambach, Canada’s Christine Sinclair (177) is closing in on. The 34-year-old hit 11, 16, eight and ten goals respectively in each of the past four FIFA Women’s World Cup years. Sinclair could also become the first men’s or women’s footballer to score an international goal in 20 calendar years.

175 goals is the English top-flight record for a foreign player, held by Thierry Henry. Sergio Aguero began 2019 with 152 to his name.

122 goals in an Eredivisie season is the record Ajax, aided by 33 from Johan Cruyff, have held since 1966/67. Ajax aces Hakim Ziyech, Dusan Tadic and Klaas-Jan Huntelaar, and PSV stars Hirving Lozano, Gaston Pereiro, Steven Bergwijn and Luuk de Jong, have helped their clubs score 60 goals in the first 17 rounds of 2018/19.

72 years have passed since a country won three consecutive Copa Americas – a statistic Chile will strive to shift at Brazil 2019. Alfredo Di Stefano, Angel Labruna, Jose Manuel Moreno, Felix Loustau, Norberto Mendez and Adolfo Pedernera helped Argentina become the first and only nation to win three in a row between 1945 and ’47.

50 appearances at the FIFA Beach Soccer World Cup is what Mao (46) could become the first player to reach at Paraguay 2019. The Brazil goalkeeper could, nevertheless, lose the distinction of being the tournament’s most-capped player to Portugal’s Alan.

20 assists in a La Liga season – set by Xavi in 2008/09 – is the record Lionel Messi’s extraordinary invention is threatening. ‘The Atomic Flea’ has ten to his name after 17 of 38 rounds.

14 consecutive top-tier titles is what Belarussians BATE Borisov could make it in 2018 to tie the European record shared by Latvians Skonto Riga (1991-2004) and Gibraltarians Lincoln Red Imps (2003-16). Vanuatu’s Tafea hold the world record: 15 in succession.

10 is the number of successive Women’s World Cup matches that Japan have scored in. The tournament record is the 15 games Norway netted in between 1991 and ’99.

9 German Bundesliga crowns is what Franck Ribery could become the first player to pocket. The 35-year-old Frenchman currently shares the record with Mehmet Scholl, Oliver Kahn, Bastian Schweinsteiger and Philipp Lahm. Bayern Munich are, however, six points behind leaders Borussia Dortmund at the halfway stage.

8 consecutive top-flight titles in Europe’s big five leagues is what Gigi Buffon will become the first player to reach if he follows up seven straight Scudetti with Juventus by helping Paris Saint-Germain win Ligue 1. Gregory Coupet, Sidney Govou and Juninho Pernambucano won seven successive titles with Lyon from 2002 to ’08.

7 World Cups is what Formiga is in line to become the first player – male or female – to play in. The Brazil midfielder, who turns 41 in March, could also become the second player in their 40s to score in a men’s or women’s global finals.

6 straight UEFA Champions League trophies will have gone to Spain if Atletico Madrid, Barcelona or Real Madrid triumph in the Wanda Metropolitano decider. It would equal the European Cup/Champions League record held by England, thanks to Liverpool (thrice), Nottingham Forest (twice) and Aston Villa keeping the trophy between 1977 and ’82.

0 players have won the English, Italian and Spanish top flights, with Cristiano Ronaldo set to become the first if Juventus conquer Serie A. The 33-year-old is also bidding to become the second player to win the Champions League with three different clubs after Clarence Seedorf (Ajax, Real Madrid and AC Milan).

Managing Executive at 82 IDEAS COMMUNICATIONS Head of Sports at Trend1009fm. Join us today, become a news contributor to The Liberty Times™ Put on your story-telling hat and share a story and Liberate your mind today! TOGETHER WE SPEAK, and THE WORLD LISTENS! Send your stories to email: admin@tlt.com.ng Use the hashtag #TLTNEWS247 | tweet to @TLTNEWS247 | fb messenger www.m.me/TLTNEWS247 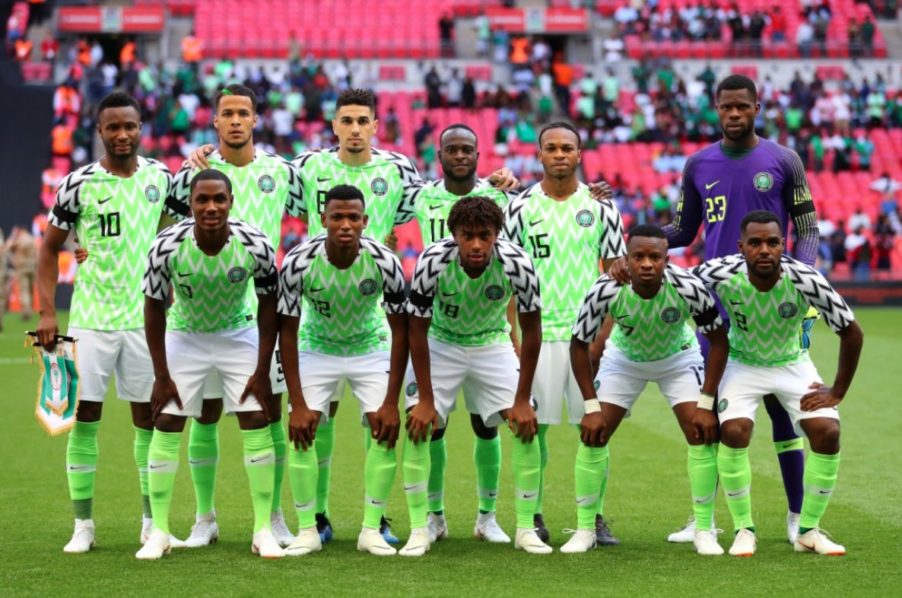 Samuel Chukwueze opened the deadlock after 27 minutes. VAR was used to confirm South Africa’s equalizer scored by Bongani Zungu after 74 minutes, but William Troost Ekong scored one minute from time to send the Super Eagles for the semifinal for the first time since they were crowned champions in 2013.
South Africa will leave Egypt with heads high after reaching the last eight despite playing in the group of death, and then eliminating hosts and favorites Egypt from the Round of 16.
Wilfried N’didi gave Bafana Bafana an idea of what to expect when he had the first shot after 6 minutes. And despite seeing South Africa with more possession, Nigeria had the lion share of chances.
Chukwueze broke the deadlock after 27 minutes after receiving the ball from Alex Iwobi inside the vital area. His initial shot was deflected from defense but he managed to collect the ball again and score past Ronwen Williams between South Africa’s posts.
South Africa tried to equalize but couldn’t pose real threats to Nigeria’s defense and goalkeeper Daniel Akpeyi.
After the break, Nigeria was about to double their lead. Peter Etebo sent a scorcher from a free kick but Williams hand and the crossbar stopped him after 51 minutes.
And after 73 minutes VAR interfered to give South Africa the equalizer. From a free kick, Bongani Zungu sent a header that wronged Akpeyi. The goal was initially ruled offside but VAR proved the ball came from a Nigerian defender back to let the goal stand.
Iwobi tried to restore Nigeria’s lead but his shot missed the target after 80 minutes.
And when it seemed the game is going to extra time, Williams made a fatal mistake when he missed a corner kick to leave William Troost Ekong to score in the empty net wending the Super Eagles to the semifinal.
The Super Eagles will now wait to see their opponents from Algeria and Cote d’Ivoire who lock horns in Suez on Thursday.
Share Cheers!
Continue Reading
Advertisement